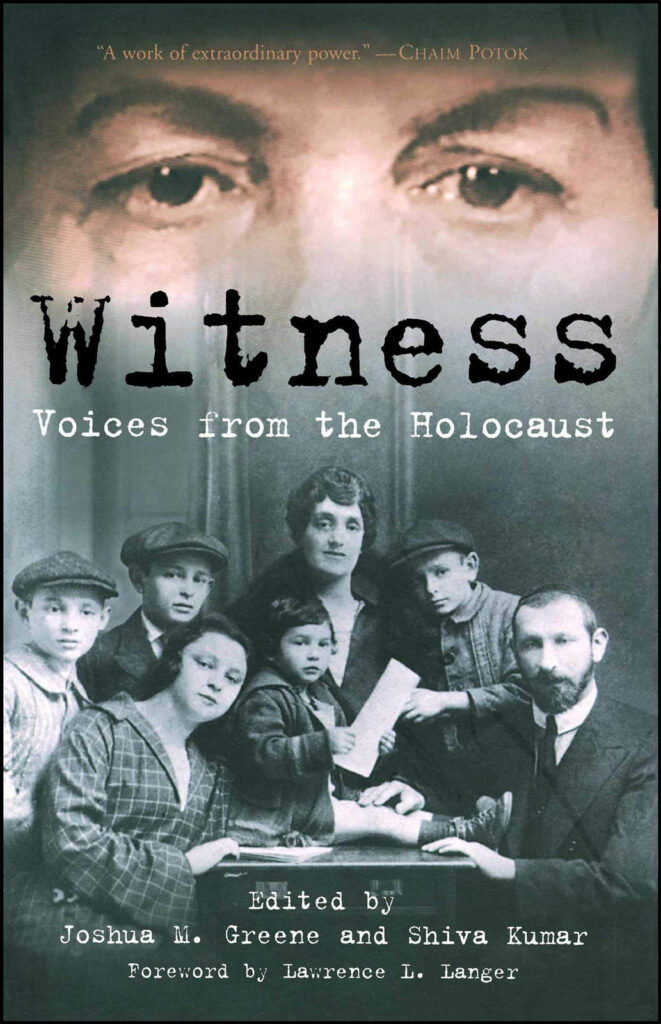 Witness: Voices from the Holocaust

More than half a century after the end of World War II, the Holocaust continues to cast a dark shadow.

For decades, the Fortunoff Video Archive at Yale University has sought to preserve the human side of this inhuman era by videotaping testimonies from those who lived through the Nazi regime, a project that has led to an acclaimed documentary film and this extraordinary book.

The Wall Street Journal called the documentary “eloquent and unsparing,” and Daily Variety said it was “a staggeringly powerful record.” The Washington Times said that Witness “gives new meaning to the term documentary. [It is] as pure a document as I have ever seen on television.”

In Witness: Voices from the Holocaust, Joshua M. Greene and Shiva Kumar weave a single and compelling narrative from the first-person accounts of twenty-seven witnesses, including camp survivors, American military personnel, a member of the Hitler Youth, a Jesuit priest, and resistance fighters. The vivid and detailed memories of these witnesses testify to the continuing impact of this human catastrophe, and their impassioned words lend immediacy to events that resonate to this day.

Appreciations for the documentary

“All the production values and visual effects in the world can’t top the stark power of a first-person account… In ‘Witness: Voices from the Holocaust,’ a single camera captures the blood-and-tear soaked remembrances of individuals who lived through the Nazi genocide of European Jewry. It is a staggeringly powerful record.”

"The testimonies are absorbing and have some eye-opening details and anecdotes - the audio visual equivalent of a trial transcript, a literal act of witness. The survivors become differentiate as characters. Some speak with anger, others through tears. The only explanation for survival, ‘Witness’ suggests, is that there was no explanation.”

Appreciations for the book

"After reading some 100 Holocaust-related books, this is one of the best survivor compilations. From the girl whose parents were deaf, to the American soldier wrongly arrested and interned, this book allows those who lived the hell of the Shoah to tell their [story] in their own way. I literally did not put this book down until I finished every page. It made me cry, and again question how the world stood by and allowed this to happen."

"Every person on earth should read this."

"You can feel the pain these people experienced, not just in the concentration camps, but in the decades since. There is very little sense of triumph that they survived, more of overwhelming loss for all that was taken from them."

The full documentary of Witness: Voices from the Holocaust made available by the Fortunoff Video Archive for Holocaust Testimonies at Yale University