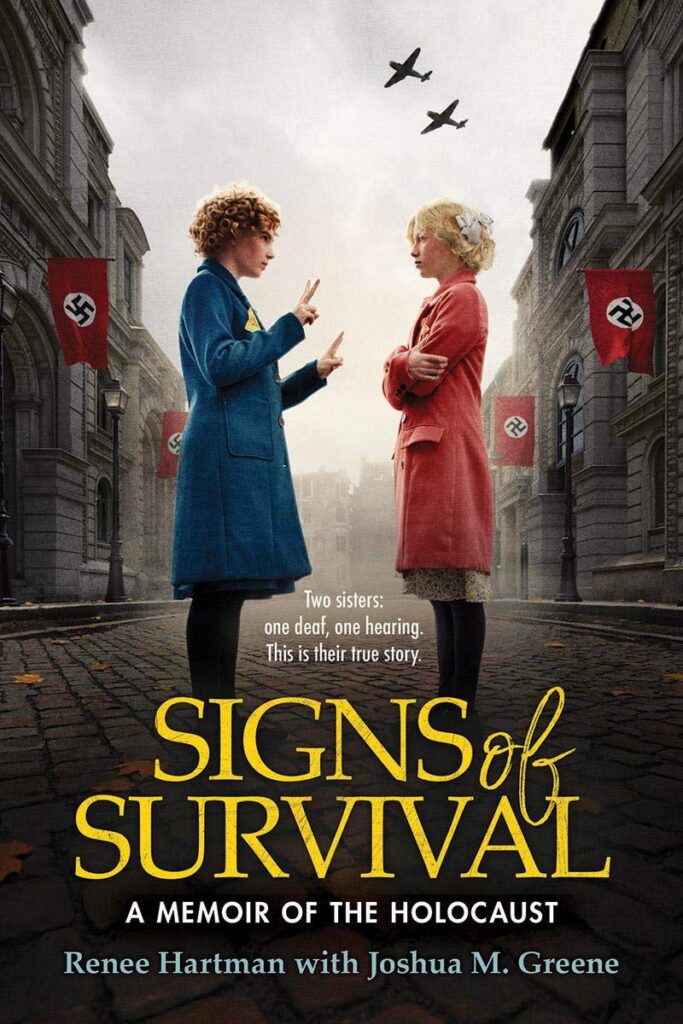 Signs of Survival: A Memoir of Two Sisters in the Holocaust

A Memoir by renee hartman with Joshua M. Greene

Two sisters: one deaf, one hearing. This is their true story.

“I was ten years old then, and my sister was eight. The responsibility was on me to warn everyone when the soldiers were coming because my sister and both my parents were deaf.“

Meet Renee and Herta, two sisters who faced the unimaginable — together. This is their true story.

As Jews living in 1940s Czechoslovakia, Renee, Herta, and their parents were in immediate danger when the Holocaust came to their door. As the only hearing person in her family, Renee had to alert her parents and sister whenever the sound of Nazi boots approached their home so they could hide.

But soon their parents were tragically taken away, and the two sisters went on the run, desperate to find a safe place to hide. Eventually they, too, would be captured and taken to the concentration camp Bergen-Belsen. Communicating in sign language and relying on each other for strength in the midst of illness, death, and starvation, Renee and Herta would have to fight to survive the darkest of times.

This gripping memoir, told in a vivid “oral history” format, is a testament to the power of sisterhood and love, and now more than ever a reminder of how important it is to honor the past, and keep telling our own stories.

As the only hearing person in her family, Renee must guide her deaf parents and sister through the horrors of a Nazi invasion. Based on a true story.

“In 1944, ten-year-old Renee Hartman’s her fam­i­ly and com­mu­ni­ty are round­ed up and sent to Auschwitz; her one remain­ing rel­a­tive is her deaf younger sis­ter, Her­ta. This con­nec­tion becomes more pre­cious, her last link to nor­mal­i­ty and family.” Read the article.

"This is a compelling story, exploring the role that senses play when one is in danger as well as presenting the candid recollections of everyday details of two children navigating appalling conditions during wartime. An extraordinary tale of sisterhood and survival."

"Signs of Survival is a compelling story... should be required reading."

"Mem­oirs such as Renee’s under­score, as no oth­er doc­u­men­ta­tion can, the indi­vid­ual human expe­ri­ence of the Holo­caust. Sto­ries of the Holo­caust show the human spir­it and also the fail­ure of that spir­it; these nar­ra­tives show acts of hero­ism and also the unheroic acts Jew and oth­er vic­tims of the Nazis had to do just to stay alive."

The Sound of Boots

RENEE: In 1943, German soldiers rounded up the Jews living in my city, Bratislava, and sent them to death camps to be killed. There would be eight to twelve soldiers marching together from house to house, knocking on doors, and yelling, “Get ready to leave! You have one hour!” I remember the stomping of their boots on the cobblestoned streets.

My parents, younger sister, and I lived in a fourth-floor apartment, and when I heard the sound of those boots, I ran to warn my family. Then we rushed into a room at the back of the apartment and hid. When the soldiers knocked on our door, we didn’t answer and stayed as quiet as possible.

I was ten years old then, and my sister was seven and a half. The responsibility was on me to warn everyone when the soldiers were coming because my sister and both my parents were deaf.

I was my family’s ears.