“Greene lets Wilzig’s effervescent spirit shine through, and his story will appeal to a wide variety of readers.” 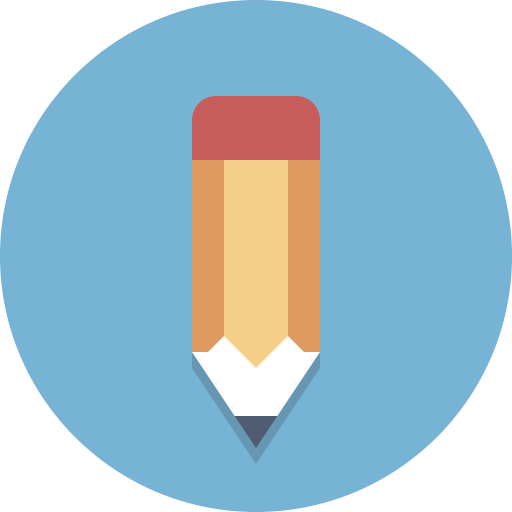 Library Journal READ THE REVIEW
"Just when we most need it, UNSTOPPABLE arrives to remind us of the resilient human spirit and its capacity to overcome the most daunting foes—a remarkable narrative, from a chapter of human history that never stops grabbing us by the throat. A timely and gripping tale for us all."

Shelf Awareness READ THE REVIEW
"Siggi’s life story is a David and Goliath saga that reminds us what one individual can do—a unique, mesmerizing biography."

Kirkus READ THE REVIEW
"Siggi’s ascent from the darkest of yesterdays to the brightest of tomorrows holds sway over the imagination in this riveting narrative of grit, cunning, luck, and the determination to live life to the fullest." 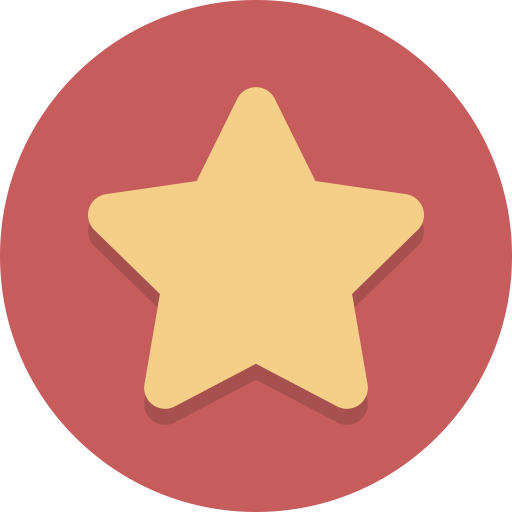 Would you like to have Joshua speak to your community or organization?

Send us an email

Check out the calendar for virtual and in-person discussions and presentations about UNSTOPPABLE and the life of Siggi Wilzig. 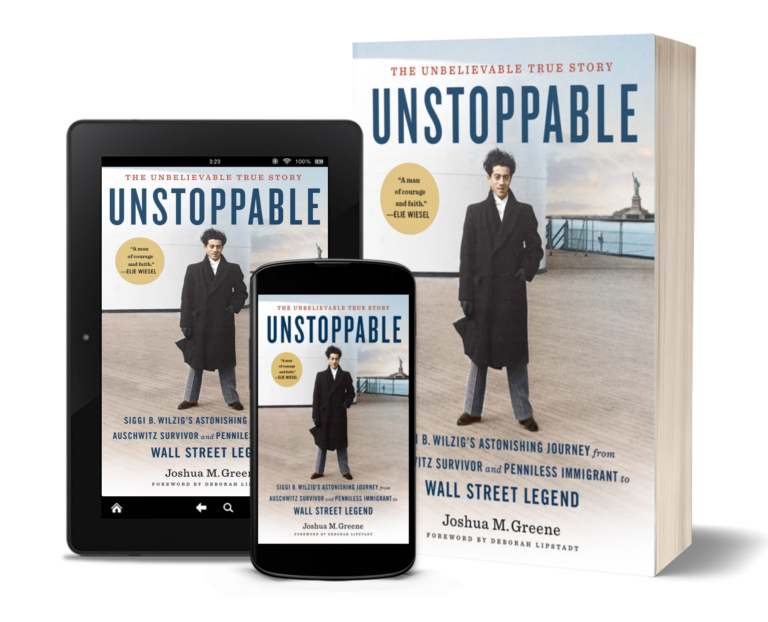 Siegbert (Siggi) Wilzig (March 11, 1926 – January 7, 2003) was a survivor of the Holocaust. He arrived at age 21, with only $240 and no education beyond grade school. He earned his first dollar shoveling snow after a fierce blizzard. His next job was laboring in toxic sweatshops. From these humble beginnings, he became President, Chairman and CEO of a New York Stock Exchange-listed oil company, then grew a full-service commercial bank to more than $4 billion in assets—achievements in two of postwar America’s most anti-Semitic industries. The engine that drove him forward was a determination to preserve Holocaust memory.

He was a two-time Presidential appointee to the U.S. Holocaust Memorial Museum in Washington, D.C. Wilzig’s life story reveals the tensions and consequences of Holocaust memory and provides a window into the psychology of those who came out of “history’s darkest hour.” 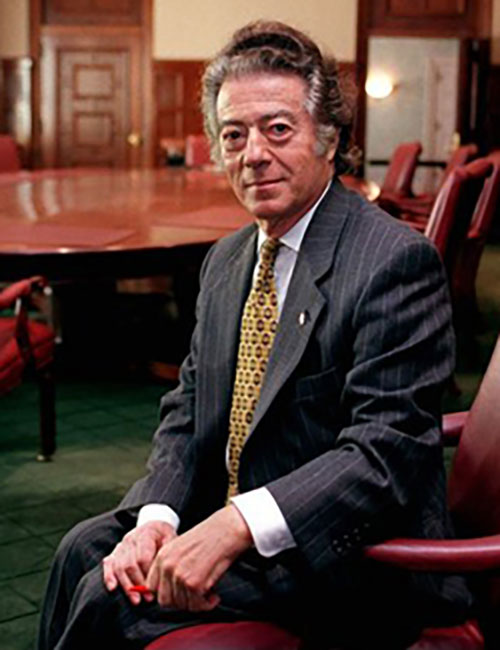 Siggi B. Wilzig was born in 1926 in Krojanke, West Prussia. The Wilzigs had roots dating back 300 years in Germany. His father was a decorated World War I veteran and trader in textiles and scrap. In February 1943, after two years of slave labor, Siggi and his family were transported to Auschwitz. His mother and other members of his family were sent immediately to the gas chamber. Siggi survived the first of more than a dozen selections by pretending to be older than sixteen and a master toolmaker. His father was bludgeoned by guards and died in Siggi’s arms. He spent the next twenty-three months in Auschwitz. In May 1945, after two death marches, Siggi was liberated from concentration camp Mauthausen by the American forces.

Siggi felt such gratitude for his American rescuers that he spent the next two years assisting the U.S. Army Counter-Intelligence Corps in tracking down Nazi guards and Gestapo operatives in Austria and Bavaria. He emigrated to America in December 1947, weighing only 98 pounds, with only a few dollars and knowing no one. His first job was shoveling snow in the Bronx after a heavy blizzard that winter. In the 1950s, he held numerous jobs including working as a bow tie presser in a Brooklyn sweatshop, a traveling leather-bound, loose-leaf binder salesman and a furniture store manager. He met Naomi Sisselman, nine years his junior, and the two were married in a civil ceremony on New Year’s Eve 1953. The couple had three children over the course of their marriage: sons Ivan and Alan and daughter Sherry.

In the early 1960s, Siggi began investing in stocks. One stock that particularly caught his interest was Wilshire Oil and Gas. With help from friends and relatives, he led a proxy battle and in 1965 was elected to the Wilshire board of directors. Six months later, at the age of 39, he was elected President and Chief Executive of the company. During his tenure, Wilshire acquired a large interest in the Trust Company of New Jersey, a a full-service, commercial bank bank. Siggi became a director in 1969 and was elected Chairman and President two years later. Over the next thirty years, he grew the bank’s assets from $181 million to more than $4 billion. He received honorary doctorates of law from Cardozo Law School and also Hofstra University Law School, where he endowed the Siggi B. Wilzig School of Banking Law. He retired as president and chief executive in 2002. Prior to his death in 2003 from multiple myeloma, he gave testimony for the Steven Spielberg Shoah Foundation. Running more than ten hours, it is the longest survivor testimony in the Foundation’s collection. In 2003, the Trust Company of New Jersey, “The Bank With Heart,” was sold to North Fork Bank for $726 million. He is survived by his three children and four grandchildren.

In addition to his business interests, Wilzig was active in humanitarian and philanthropic causes, particularly those related to the Holocaust. In 1980, he was appointed as a founding member of the Holocaust Memorial Council in Washington. He was the first Holocaust survivor to lecture at West Point. He was a founding director and fellow of the Benjamin N. Cardozo Law School of Yeshiva University. For his support of the state of Israel, he received the Prime Minister Award in 1975. In recognition of his contributions to the United States, he received the Ellis Island Medal of Honor in 1998. Siggi’s achievements enabled him to support a number of charities.  He endowed the Wilzig Hospital, a state-of-the-art medical facility and part of the Jersey City Medical Center;  the Daughters of Miriam Home for the Aged; and the Jewish Home and Rehabilitation Center.

May 18, 2021
Hosted by Books & Books and FIU at the Botanical Gardens in Miami, Florida. An evening filled with stellar interviews and moving speeches, we were joined by Ivan Wilzig and Unstoppable author Joshua M. Greene for a night honoring Siggi B Wilzig.
Click for Photos and Videos
News

May 31, 2021
A Beacon of Hope for All Immigrants: Spotlight on Joshua M. Greene
Read the Article
Story

April 7, 2021
Ivan Wilzig and the Peaceman Foundation have teamed up with Congregation B’nai Jeshurun to help individuals navigate the complex system of COVID vaccinations, appointments, and transportation. This effort will allow B’nai Jeshurun to expand their program to all vaccine-eligible individuals within New York City, with a special emphasis on the elderly, Holocaust survivors, and the immigrant community.
Learn More
News

May 22, 2021
Eric Shawn: From Auschwitz to America, he lived the American dream 'on steroids'. The life of concentration camp survivor Siggi Wilzig is celebrated during Jewish-American Heritage Month
Watch the Video
Story

April 7, 2021
‘Never give in to despair’. Siggi Wilzig’s children and his biographer remember the survivor, oilman, and banker
Read the Article
Cover Story

Siggi’s story, in his own words

16-Minute documentary about the life of Siggi B. Wilzig told using archival footage and Siggi’s testimony from the Shoah Foundation.

The battles lost, the war won
Read the article
FORBES

Why did you agree to write the biography of Siggi B. Wilzig?

Like people I’ve written about in the past, either celebrities or innovators, Siggi Wilzig’s life is surprising, moving and has an unpredictable ending. In outline form, it tells a familiar story: a young Jewish refugee arrives in America with nothing and climbs to the top of the material mountain. In detail, it is a modern-day David and Goliath adventure. In the Biblical account, David was this little guy who takes a sling and five stones from a brook, comes before this pagan giant and shouts out, “This day I will strike you down, that all the earth may know there is a God in Israel.” Well, that was Siggi: five-foot-five-and-a-half inches short, a survivor of Hitler’s inferno, who takes on the giants of oil and banking, and builds a kingdom so that people will listen when he declares to the world that there is a God in Israel. There is this great painting of David and Goliath by nineteenth-century artist Osmar Schindler. That’s the image I have of Siggi.

There are many Holocaust memoirs that tell a similar story of someone becoming successful after the war. What makes this one different?

What did distinguish him was becoming the only Holocaust survivor to commandeer the takeovers of an American oil company and a commercial bank — to say nothing of being the first person in history to sue the Federal Reserve. There was a volcanic drive behind those campaigns. He refused to remain silent when anyone, including the American government, perpetrated an injustice. He was also an extraordinarily eloquent speaker when it came to Holocaust memory. He had a razor-sharp mind, an uncanny facility for language and the intuitions of a fox. Did he acquire those qualities in Auschwitz? Maybe. They were certainly honed to a fine edge there. But like all of us, he was a flawed human being. The best biographies paint a realistic portrait of ordinary people who somehow become extraordinary. Siggi Wilzig was an extreme case of that.

What would Siggi Wilzig want readers to take away from his life story?

Over and over again in talks and lectures, he said he was “writing” a book. Why? What was his purpose? I found three life goals that were most important to him: provide for his family, protect memory of the Holocaust, and care for the wellbeing of children. Everything he did was to achieve those three ends. But there was a moment when his father laying dying in his arms in Auschwitz, and I think his father’s last word were the theme of Siggi’s life: “Don’t be bitter, and stick to your principles.” To the end of his days, Siggi had nightmares. But he wasn’t bitter. There was a marble plaque on his office wall that said it all: FREE MEN WHO FORGET THEIR BITTER PAST DO NOT DESERVE A BRIGHT FUTURE. He urged people never to forget their bitter past, but he never encouraged anyone to dwell in it. And along with memory of the past came unshakeable faith. Despite every reason to abandon faith in God, he never did.

What was the hardest part of writing this story?

Siggi never wrote anything down. There was no “Wilzig archive” to work from. He never even wrote letters. So everything had to be pieced together from interviews and historical research. Siggi did give his testimony to Steven Spielberg’s Shoah Foundation—in fact, his is the single longest testimony in the Shoah Foundation’s 50,000 hours of recordings. That, plus talks he gave to schools and community groups, add up to nearly 800 pages of transcripts. Those were critical, since they gave me his remembrances in his own words. 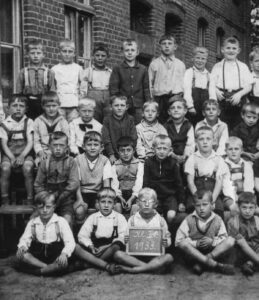 1935, Krojanke elementary school. Siegbert (third row center) was the smallest in his class.
1932