Justice at Dachau : The Trials of an American Prosecutor

The story of Colonel William Denson

Acclaimed account of the largest war crimes trials in history.

In 1945, inside a makeshift courtroom on the grounds of former concentration camp Dachau, a young lawyer from Alabama led the prosecution against more than 1,300 Nazis accused of history’s most atrocious crimes. William Denson had no background in war crimes. Mass murder had no precedent in a military courtroom. For three years, the idealistic Denson pursued due process verdicts in grueling trials that nearly cost him his life. Among the accused: Dr. Klaus Schilling, responsible for hundreds of deaths in his “research” for a cure for malaria; Edwin Katzen-Ellenbogen, a Harvard psychologist turned Gestapo informant; and Ilse Koch, “the Bitch of Buchenwald,” whose penchant for tattooed skins and human-bone lamps made headlines worldwide.

Author Joshua M. Greene received exclusive access to Denson’s personal archives, including trial transcripts, newspaper clippings, and a trove of photographs and letters. Greene has reconstructed the Dachau trials with the immediacy and excitement of a legal thriller. Justice at Dachau resurrects a forgotten American hero and shines a light unprecedented trials that have had an impact on criminal proceedings in today’s news. 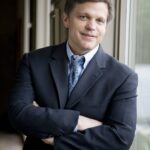 "Brilliantly written and fastidiously researched, Joshua M. Greene’s narrative builds chapter by chapter in dramatic Hollywood-like fashion. Each war criminal Denson convicts brings a cheer to the heart. This is historical storytelling at its finest."

"Justice at Dachau is a mesmerizing account of one of history’s most infamous periods. Joshua Greene takes the reader back in time by weaving together a riveting narrative on the trial and its central figure Judge William Denson, a true hero and humanitarian. This book is destined to be a classic in Holocaust histories."

author: Beyond Valor and Into the Rising Sun
5

"Greene, who produced and directed the award-winning documentary Witness: Voices of the Holocaust, does a masterful job of gathering the reams of documents and piles of evidence and forming them into a cohesive and gripping story. His writing is simple but effective, without histrionics yet demanding attention. Denson died in 1998; this is a fitting and much-needed tribute to his work."

"A cogent, well-written contribution to legal and military history, and fitting tribute to a principled man."

"This was a brilliant book, so powerful and well written."

"As a fanatical student of WW2 and particularly the Holocaust I have always been astounded by the fact that so few perpetrators of the most heinous crimes committed in the war...were never sentenced to death. "Justice at Dachau" goes a long way in answering those pressing questions."

"Powerful, haunting, disheartening, important, hopeful, all of those words fit this book. It’s a powerful picture of the difference Denson’s persistent drive to obtain justice made."

The Justice at Dachau presentation has been presented over 100 times at legal education conferences, synagogues, book clubs, universities, and community centers.

Denson drove to JAG rear headquarters in Munich—known affectionately as “Lucky Rear”—where the Dachau trials were being prepared. He arrived at the Munich inn that would be his new home, unpacked quickly, and set out in his jeep for Dachau. Munich had been heavily bombed in the final weeks of war, and roads were strewn with rubble from toppled buildings. He drove out of the ruined city and into fields and hills in the bloom of summer. Six miles west he crossed a stone bridge, traversed a long road flanked by poplars and a row of look-alike houses, and drove through the gates of the camp.

The bodies were gone, but everything else was as it had been at liberation. The crematorium chimney rose from its brick foundations near the Schiesstand, or execution wall. The ground beneath the wall was still stained rust red, and the smell of blood was still strong. He walked around the periphery of mass graves, beneath the limbs of hanging trees, across the roll call yard. A large area inside the camp was enclosed with barbed wire. Inside the holding cage were barracks. German prisoners moved in and out of the buildings. Some of them watched him as he made his way around the camp.

He entered the Records Room, a twenty-by-thirty-foot office. Wooden shelves and metal cabinets lined the walls. He took folders from a shelf and read reports of men, women, and children crowded together like cattle, suffocating in sealed boxcars. He read of typhus epidemics that went unchecked, killing more than three thousand inmates per month. He read statements by liberation soldiers who had discovered emaciated prisoners lying on bunks saturated with blood and excrement. He read interviews with victims who spoke of medical tortures, beatings, grossly inadequate food, scant clothing in subzero winters, nonexistent sanitation, and numbers of people killed, numbers so large they made him dizzy.

Denson exited the Records Room, lit a Lucky Strike, and wondered what in heaven’s name he had walked into. Years later he confessed to simply not believing what the evidence told him. Lynching and torture had always been exceptions to human behavior, not the rule; and Germany was the home of classical music and philosophy, not the barbarism these reports described. He did not believe because his religious training rejected the notion of absolute evil, yet biblical descriptions of the Apocalypse did not come close to the nightmares of Nazi camps. He did not believe because Harvard Law School had taught him to distrust circumstantial evidence, illogical reports, and anything his innate intelligence found suspicious. Like most Americans, he had read a few articles and knew prisoners had been killed in the camps. But mass murder on this scale was unfathomable. Denson did not believe because believing would mean that the world was not the neat and tidy place he’d always thought it to be. A man is born, be it in Birmingham, Alabama, or Warsaw, Poland. He grows up, studies hard, works sincerely, serves God, leads a good life, and is entitled to expect that such sacrifice and decent behavior will bear fruit. But from these reports, leading a virtuous life had proved useless against Nazi terror. Even worse, virtue proved to be a deficit in the camps. Gestures of kindness were rewarded with floggings and death. Goodness and mercy were luxuries from a privileged world: they had no place in Dachau. When Germany’s first concentration camp opened its gates, a crack had appeared in the structure of things, and now the army was saying he was responsible for sealing the fissure.

He did not believe because believing would mean giving up the provincial, mannerly approach to law that had been his style until now and turning ruthless in pursuit of convictions. Bill Denson had never been a ruthless man. 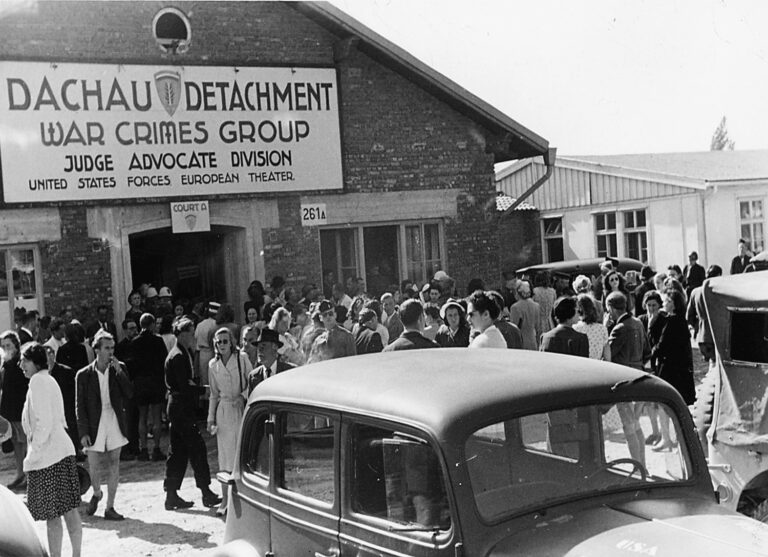 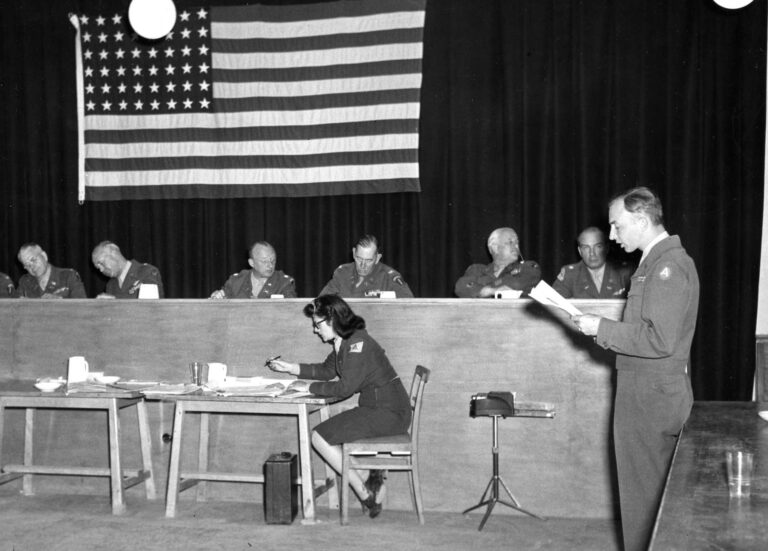 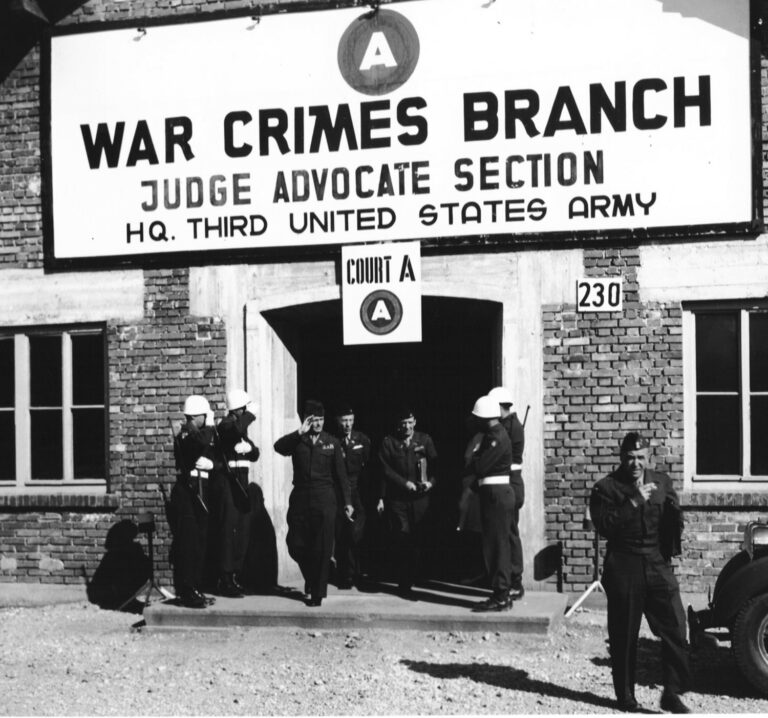 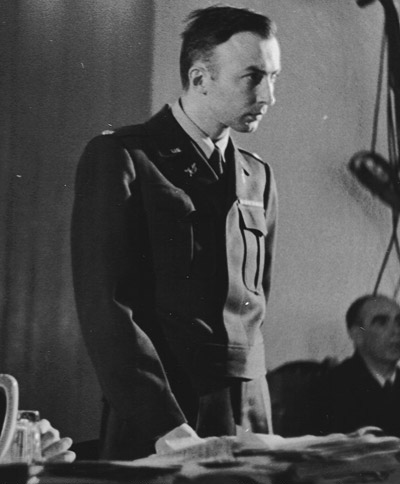 NPR - Remembering the Horrors of Dachau

Joshua M. Greene appears on NPR during the 75th anniversary of the liberation of Camp Dachau.

After three years, 15,000 pages of trial transcripts and dozens of interviews with witnesses to events of the period, Joshua M. Greene wrote this riveting account of the Dachau trials—the largest yet least-known series of Nazi trials in history. The story of those three years of proceedings and their chief prosecutor William Denson came to Greene’s attention in 1998, shortly after Mr. Denson’s death on Long Island. In their first meeting, Denson’s widow, Huschi, showed him an astonishing cache of materials in her basement: the results of fifty years of research by her late husband. That extraordinary archive formed the basis of Greene’s current book, which has also be published in a paperback edition by the American Bar Association.

What prompted you to undertake such a labor-intensive task?

Writing another book on the Holocaust period was the farthest thing from my mind. But when Huschi Denson took me into the basement of her home and switched on the light, it was like discovering Aladdin’s cave. Her late husband had dedicated half a century of effort compiling every document, transcript, photograph and personal letter he could find to bring these trials to the world’s attention. When Huschi asked for my help, it felt like a calling more than just a writing assignment.

What need does this book fill?

Until now, Nuremberg has been the Nazi trial known to most of the world. But the handful of Nazi chieftains convicted at Nuremberg never lifted a gun. The henchmen who conducted the torture, starvation, brutal medical experiments, and mass slaughter were tried at Dachau 65 miles south of Nuremberg. Few people have ever heard of the Dachau trials, yet they were vastly larger in scale and established important precedents in war crimes law, particularly with regard to chain of command: how far down the line can people be held accountable?

What do you feel readers will respond to in this book?

For one, the accused on trial at Dachau were monstrously cruel characters. Ilse Koch, the infamous “Bitch of Buchenwald,” had prisoners beaten to death so she could collect their tattooed skin. Dr. Klaus Schilling, who was recipient of two Rockefeller Foundation grants for medical research, murdered hundreds of prisoners in his inhumane search for a cure for malaria. Edwin Katzen-Ellenbogen was an American psychologist who set himself up as a privileged prisoner in Buchenwald and killed other prisoners who refused to pay him ransom. Unbelievable. Even more compelling is Denson himself, a man who risked his life to conduct fair trials, even after the Army told him to stop. That was a dangerous but exemplary commitment to due process.

The book explores Nazi trials that took place more than seventy years ago. Does the book have special relevance today?

Front-page relevance. We’re still confronting issues that challenged Bill Denson at Dachau. How are we to prosecute mass atrocities? Who is entitled to due process of law? What rules govern the pursuit of justice? How much or how little can we expect of international war crimes tribunals? Is the United States right or wrong for consistently refusing to become a signatory to the International Criminal Court? There is relevance on a more personal level as well. Bill Denson approached his work as though it were a spiritual mission. Here he was, a country lawyer, a deeply religious man of God, with no clue what he was getting himself into, determined to prove that the law is capable of addressing even unprecedented crimes. Especially today, at a time when integrity in leadership is in short supply, Colonel Denson provides a wonderful role model.

Is there one moment in the book that touched you the most?

Denson’s counterpart on the Dachau defense team, Douglas Bates, was a man much like Denson: a God-fearing, patriotic son of the South who was appointed to defend the Nazis. When those two giants of law confronted one another during their closing arguments in the first Dachau trial, echoes of Daniel Webster, Abe Lincoln, Winston Churchill rang through my head—each man speaking out passionately from the depth of his conviction about important truths. Scenes like that can’t be invented.