Betrayal of the Rule of Law in Nazi Germany

This acclaimed program includes the 35-minute film “Hitler’s Courts,” which premiered on the PBS series “The Open Mind.” The film features archival footage from the Nazi era along with comments from leading voices in international law: Whitney R. Harris, a member of the prosecuting team in Nuremberg in 1947; Gabriel Bach, former assistant prosecutor at the 1961 trial of Adolf Eichmann; Michael J. Bazyler, Professor of Law at Whittier Law School; and Raymond Brown, Professor of Law at Seton Hall Law School, among others. The lecture analyzes how distinguished lawyers and judges betrayed the rule of law and laid the groundwork for legally-sanctioned torture, starvation and mass murder. 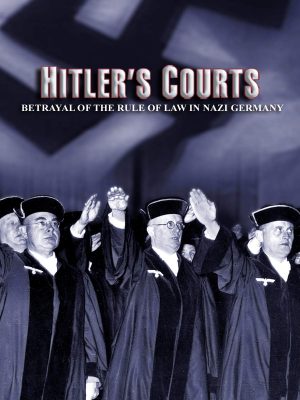 When the lawyers and judges of Nazi Germany placed their allegiance to the Fuhrer above their allegiance to due process of law, Hitler’s success was assured. The horrors of the Holocaust had the sanction of law and demonstrated how easily even a constitutionally governed nation can fall prey to the rhetoric of despots.

“One of the most compelling documentaries I have ever seen—high drama, profound historical understanding, and, most important, extraordinary lessons for the present.”

“Excellently produced—a perfect tool for examining the misuse of law and the inhumanity that fueled the Shoah.”

“Brilliant and chilling, a powerful reminder that law can be used to advance both the best and worst of what we humans are capable of doing.”