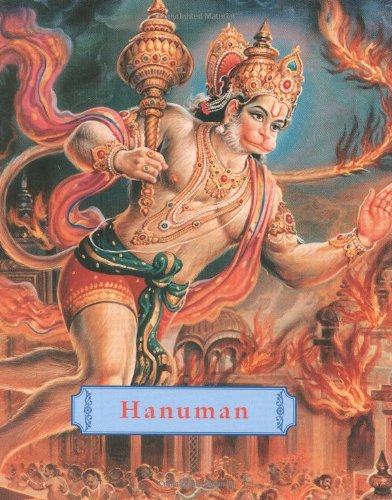 The timeless story of Hanuman, the monkey god, is that of a valiant superhero best known for battling the demon Ravana in the classic tale Ramayana. But there is much more to know about Hinduism’s bravest, most endearing figure. As a youth, Hanuman’s pranks often led him into trouble with the village elders. Eventually they cast a spell, causing him to forget his immense powers. In a cursed state of ignorance, young Hanuman believed himself to be just an ordinary monkey. He realized his potential as a warrior only later, while rescuing Sita, the kidnapped wife of Rama, from the clutches of Ravana.

Although Hanuman developed mesmerizing mystic abilities as he matured, it is his sensitivity and devotion to King Rama that make him such a memorable character.

An "excellent retelling of a portion of the ancient Indian epic, the Ramayana. This version takes the unusual perspective of Hanuman, military leader of the monkey clan. The tale opens when he is an impish young monkey, daring to fly to the sun. During his flight, he becomes distracted and falls, thus earning his name which means “broken chin,” and the elder monkeys pray he forgets his magical powers. Years later, when the evil 10-headed creature Ravana steals Rama’s beloved wife, Sita, the monkey is deeply moved by the young prince’s broken heart. His clan joins forces with Rama to confront Ravana. Now Hanuman must remember the incredible powers of his youth for they are crucial in the climactic battle. The narrative has a storytelling quality and an appropriately epic tone. Masterful oil paintings illustrate the text; they are charming when depicting the mischievous young Hanuman and powerful and striking when portraying scenes of danger and battle.”
School Library Journal

"It's a wonderful introduction to Hanuman, the most devoted of servants. Text and illustrations mesh perfectly, and there is so much life and movement, not to mention gorgeous color! High praise to everyone involved."

"My book arrived today and I stood at the table in the post office, read the entire book cover to cover and could not help but get misty eyed. The illustrations are simply gorgeous. The lessons taught are even more beautiful; among them 'There is no such thing as large or small when it comes to acts of love.'"

"The artwork is vivid with wonderful details. [My kids] respond to the humor, the magic, the characters--both frightening and heroic, the great adventures and the selfless actions in this great story. I've seen one other illustrated version of this story in a collection and found the pictures to be weak and unimaginative. These paintings are gorgeous."