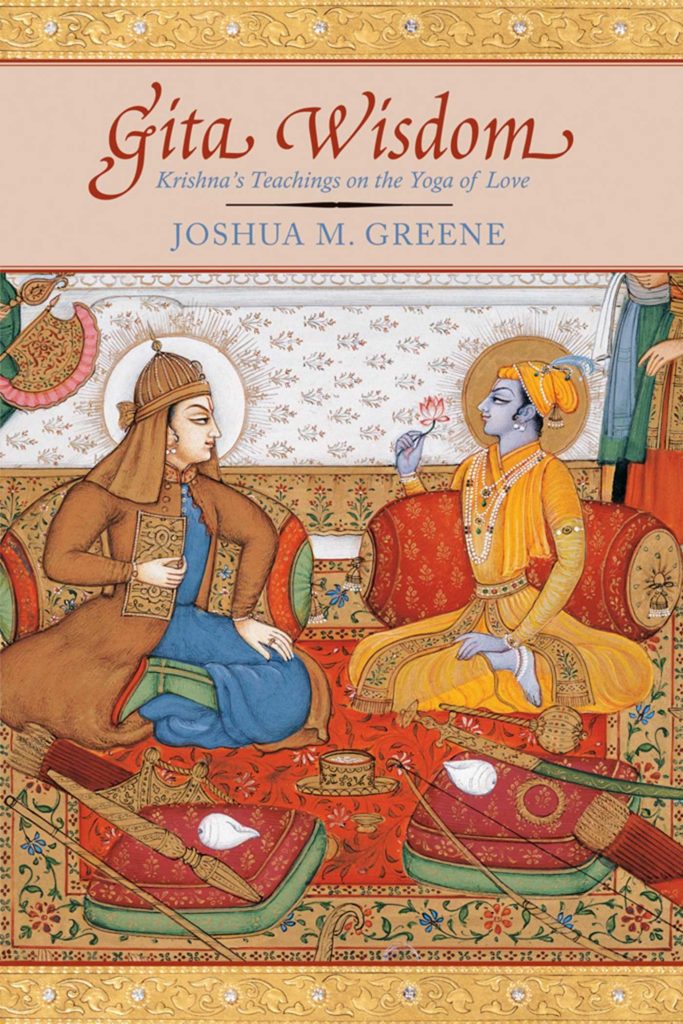 In his popular introduction to Bhagavad Gita, author Joshua M. Greene distills the Gita’s 700 verses into easy-to-follow dialog and insightful commentaries. He reveals that this quintessential yoga treaty is, in essence, a heart-to-heart talk between two friends about the meaning of life. As Krishna and his warrior-friend Arjuna reminisce on a battlefield known as Kurukshetra, readers learn that the two played together as children and became family when Arjuna married Krishna’s sister. In later life the men shared extraordinary adventures, including a journey to places outside the known universe.

Like all great literature, the Gita explores the human condition: who we are, where we came from, and why we’re here. Unlike most editions, here is a practical, reader-friendly introduction that has become a staple in yoga studios nationwide.

"This is an important introduction to the sacred Gita. Joshua beautifully sings the song of God making it accessible and heartfelt—a wonderful tribute to the role of Bhakti in all Yoga practices."

"This is by far the best introduction I’ve ever read of the Bhagavad Gita. I can’t recommend this book enough for all yoga students and anyone interested in beginning their relationship with this text. The author has written an accessible and short book that presents the ancient wisdom of the Gita in a way that resonates with people living in the 21st century."

"This is a welcome, recommended, and thoroughly reader-friendly addition to our understanding of Eastern spiritual literature."

Best summary of the Gita ever! I love this author's easy explanations of this classic epic. Within the setting of a battlefield, so much food for thought elicited prior to war re: the consequences of each individual life, our duties within this life and the meaning of our deeper relationship with a Supreme Loving Being. Great Job!

The Nautilus Awards seeks and promotes well-written and -produced books with messages about caring for, understanding, and improving every aspect of our lives and relationships.

We look for exceptional literary contributions to spiritual growth, conscious living, high-level wellness, green values, responsible leadership and positive social change as well as to the worlds of art, creativity and inspirational reading for children, teens and young adults.

Want Joshua to teach at your school?

Joshua has been teaching the Bhagavad Gita in yoga studios and universities for over 20 years. Taking a grounded, contemporary approach to ancient wisdom, Joshua always leaves his students with practical instructions on how to incorporate the teachings into their lives right now.

“Joshua Greene lives the Gita, which allows him to take esoteric wisdom and reveal its timeless meaning. Without such insight, yoga remains either pop culture or orthodox practice of little relevance.”

“Anyone who has attended a Gita class by Yogesvara and witnessed the enthusiasm of his students to explore the relevance of its message understands how gifted he is in making ancient teachings accessible for people today.”

“Our community is still feeling blessed from your presence last weekend. Your presentation & highly informed yet down to earth answers to our (many!) questions has already helped many of us on our path.”

“I could not go to bed without sending a heartfelt thank you for today’s workshop. It was so on point, exactly what I need and will help me so much now to actually teach “yoga” as it should be taught. It was truly one of the most helpful trainings I have ever taken.”

View the catalog of programs